I was trying to remember the last time I'd set foot on a track. I guess it was high school gym class, during the running unit, which I dreaded. And now, not too many years later, I voluntarily brought myself to a high school track and pledged to run around it for twelve hours straight. I was doing the 12-hour race at Dawn to Dusk to Dawn Ultras (just the Dusk-to-Dawn portion). 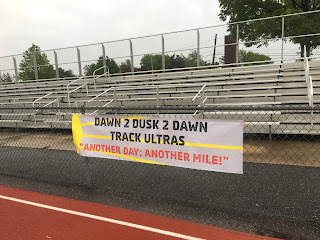 Now that I've done a few 100-mile races—and only the first of them was truly terrible, taking almost 32 hours—running for twelve hours wasn't a big deal. The whole running-around-a-track thing might have been really bad, boring, etc., or maybe not. That's what I wanted to find out—it's why I signed up back in January.

But I really wasn't feeling great about this run, on the day of. I played capture the flag with my Students Run team on Thursday instead of our shoulda-been easy few miles, and I was embarrassingly sore from the sprinting on a hot day. Then there was the whole 7pm start, which meant I wouldn't be running shortly after waking, but rather after I'd been up the whole day. I tried taking a midday nap, but I didn't get much sleep. And with being awake comes eating—I usually toe the line basically fasted with maybe a little food in my stomach, but today I must have had all sorts of stuff along the digestive party line. I tried to stick with easily digestible stuff—collagen-infused liquids, no fiber—but you never know. And then it was raining.

Still, it's not like I was going to not run, so I packed up my duffel bag at 4 and went to catch the 5:21 trolley out west. The trolley was 15 minutes late, which made me nervous—I was downloading the Uber app when it finally came. And then it was a 20-minute walk from the Darby Transportation Center to the high school in Sharon Hill. Trolley tardiness notwithstanding, this was the easiest commute to a race start I'd ever had!

In the rain I met Bill, one of the race directors, who checked me in and showed me around, and then I sat under a canopy until the 7pm start with some of the Valley Forge Military Academy cadets who were volunteering at the race.

At 7pm the rain stopped and the race started. The track was splashy for the first few hours, so I stopped periodically to dry off my feet and sandals (I was worried about getting blisters). And at sunset they were having some trouble getting the track lights on, so we had some wonderful peacefulness in the dark for a while.

I really loved running around in circles. Wonder what that says about me. It was relaxing, mind-emptying, wonderful. I didn't have to pick out my footsteps or watch out for anything. I didn't have to worry about getting lost. It was regular, predictable—hard to come by in a sport characterized by its irregularity and unpredictability.

The thing I didn't like was how competitive it made me. When I run ultras, I never think about place or winning or whatever. I just focus on staying comfortable and strong the whole time—or as long as I can, at any rate. But at this race I could see my stats every 400 meters: how long that lap took me, how much slower it was than my previous lap, what place I was in, how far I was behind the next guy. I was in second place from the get-go, where I stayed for a few hours. But I was only 2–3 laps behind the leader, depending when you checked. And of course I could see him across the track at any given point, so it naturally became my mission to overtake him, like it or not. Once I did, around the fifth hour, I think, I was paranoid about losing my lead, which pushed me to keep running. I barely talked to anyone—also somewhat unusual for me, when it comes to ultrarunning—because for the most part our paces were so different, and because I didn't want to slow or speed even a little bit.

Things got tough in the deep night, so I put on music. I listened to an audiobook for a while, but I couldn't pay attention to it for more than an hour. My legs gradually became sorer, and my calf muscles were threatening to strain, and my feet were getting tender. I put on my calf-compression socks and kept going. There was nothing left in my brain to try and stop me, I guess. My stomach was a bit upset, too. (Good thing I didn't go for the pizza in the first hour, or things would have been even worse!) I tried eating things and I tried not eating things, and then I decided to just ignore it. 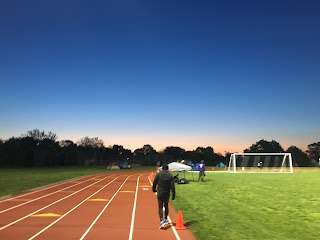 Sunrise, as usual, was rebirth. Though I wasn't as tired in the night as I've gotten during 100-milers, I still experienced a surge of energy when I saw it getting light out, and that energy stayed with me till the end.

In any case, my performance was enough to get first place. It was the first time I'd ever won a race!


And I have to say, it was inspiring seeing the 24-hour folks out there. Some of them (world record and/or Team USA contenders) were running faster than me, and they'd been going for twelve hours longer! I've got half a mind to sign up for the 24 next year to see how far I get...

Posted by Tim Gorichanaz at 6:34 AM