Yesterday was my fourth marathon. I was hoping this would be the one in which I finally broke four hours, but that was not to be the case. The jury isn't sure why—perhaps it was my lackadaisical training regimen this summer, Milwaukee's lack of any SF-caliber hills to train on, or maybe even the 10-mile hike we did the day before. (Although this blogger seems to suggest hiking the day before a marathon is a good thing. Maybe if you're used to it.)

In any case, this was perhaps the most grueling marathon yet for me... Worse than Green Bay wherein, even in 90-degree temperatures I was still feeling okay enough to power walk the second half. And maybe worse than Chicago wherein cramps physically prohibited my body from running more than a few feet at a time after the 15-mile mark. Yesterday was a new experience—I think it was "hitting the wall," something that hadn't happened to me. My whole upper body, especially my lower back, was sore, and my legs felt like bricks. It's one thing if that were to happen after the 20-mile mark, but in this case it happened at 14. Puke.

Let's back up. The day before the race, we took an amazing walk up the top of the Corona Heights hill.  We checked out the expo again, went to a few restaurants and checked out some art galleries. My feet and legs were exhausted by halfway through the day—yes, that was a bit alarming—but we got some cool photos. Below is the foggy view from the hill. 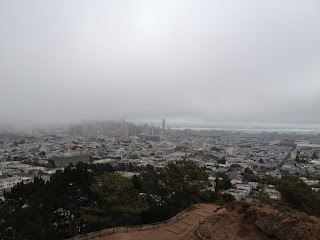 We went to bed around 8 p.m. in preparation to wake up at 4, hoping that we would be able to ignore the sirens and hollering hobos that passed by throughout the night. Luckily, I felt well-rested at 4, and I was ready. We arrived at the start just a few moments before our wave took off, during which time we got to see part of a performance by Rock the Bike (seen below). Around 5:52 a.m., we were off. 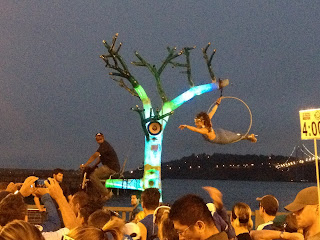 My plan was to run the first half with 9:30 miles and the second half at 8:30 miles. I started out really well, running with my brother (his first marathon!) for the first 5 miles or so. We hit the 5k with a 9:21 pace, and I had brightened to a 9:19 pace by the time we hit the 7.4-mile mark. I hit the half marathon mark with a 9:18 pace. A little faster than I'd planned, actually, but the run was exhilarating. The downhills on the Golden Gate Bridge were especially fun.

But shortly after the half, things went sour. Unfortunately, right in the middle of Golden Gate Park and all its inclines... I kept telling myself I felt good, saying I'd be able to make it the whole way without walking (by Mile 14, I hadn't taken a walking break yet). But then, everything fell apart. My back was sore (that never happens), and my brain couldn't seem to will my legs to shuffle uphill. So I took on a strategy for the next X miles in which I would run the downhill parts only and make no promises about anything else. This was extremely frustrating because my heart rate was still low and my breath was constant (one breath per four steps) and relaxed... I should have been able to push it so much more, but my legs weren't on board.

My head was getting a little messed up... It felt as if I were getting dehydrated, but I had been taking a mouthful of water every 10 minutes. And since it was only 55 degrees out and misty, I didn't think it was possible. It also couldn't be the electrolytes, I thought, since I'd been taking salt tablets and gels like I usually had been doing in the 90-degree heat of Milwaukee. Nonetheless, I was getting that seasick feeling... My pace by Mile 20 had sickened to 10:17.

I didn't get another burst of energy until Mile 22 or 23, by which time I convinced myself I could run a little bit just for the sake of getting done with this horrible experience that much faster. I would run for two or three minutes and then peter out. It wasn't until Mile 25.5 where I was able to run straight for the rest of the race.

I finished in 4:44, nearly an hour later than I'd planned, and I think I was more exhausted than I'd ever been. Probably not, though; recency makes things seem more acute than they actually are. The familiar thoughts of being a horrible marathoner, non-athlete, failure to improve, "I'm never running again," etc., went through my head, but by the evening I resolved to figure out why I seemed to have gotten slower, and more importantly figure out what I could do about it.

After some reading, I have decided:

Inspiration station: Here's another runner who went from no athletic background (like me!) to 100k winner. It just takes time and dedication. Though inborn talent may separate the first-place elites from the fourth-place ones, I'm not convinced it plays a role in most cases. This is heartening, because it means pretty much anyone can improve. A lot.

I planned for my next marathon to be the Bilbao Night Marathon in mid-October, but now I'm wondering if that's too soon. After all, I have no idea what my lifestyle in Spain will be like. Maybe I would just wait and make my next marathon something in the U.S. over Christmas and New Years when I'm home. Well, we'll see how I feel in a few days.

Posted by Tim Gorichanaz at 7:40 AM No comments:

Email ThisBlogThis!Share to TwitterShare to FacebookShare to Pinterest
Labels: Marathons

I started this blog to chronicle my quest to complete the 2011 Chicago Marathon. Little did I know, the running wouldn't stop at the finish line. I went on to run the 2012 Walt Disney World Marathon in January and then the Green Bay Marathon in May. And, in just a few days, I'll be running the San Francisco Marathon. I've decided to run a marathon in all 50 states. And who cares about why—I'm going to just do it.

From now on, I won't treat this as a training diary, but rather a place to leave accounts of each of my marathons, as well as random running/health-related thoughts and research.

Since you last heard from me, I've committed to minimalist footwear and good running form, and I've decided to power myself from a 90+% plant-based diet. Here's a list of books and movies that have inspired these decisions:

Posted by Tim Gorichanaz at 4:32 PM No comments:

Running will ruin your feet and knees? Rubbish.

Started reading a short book called Running Fast and Injury-Free by Gordon Pirie. From my perspective, it's a lot of the same stuff I've been reading for the past several months, but it must have been pretty revolutionary when it was first written! Here's a snippet:


People are advised not to run because it will ruin their feet and knees. In 45 years, I have run more than 240,000 miles without any major problems, and with more than half that distance covered on so-called hard pavement. Have I been lucky? No. I have merely employed correct technique, as described, and have been careful about the shoes I wear.

There are few accidents in athletics if a runner is successful (whether in terms of Olympic medals or just years of injury-free running), and there is a reason for this success. The most significant element is correct technique (made possible by good shoes). There is a lot more to running correctly than just getting your feet and legs working properly, however. What you do with your hands and arms is equally important. I have heard a number of well-known coaches tell runners that it doesn't matter what they do with their arms. My response is to ask them if it is okay if I run with one arm behind my back and the other between my legs. They look at me as if I've lost my marbles. Then I put both hands over my head and ask: "Is this okay?". Or, I'll put my hands on my ears and ask: "How about this?" If none of these methods of carrying your arms is correct, and if we eliminate all the incorrect ways of using your upper body and arms (reductio ad absurdum in mathematics), we logically should arrive at something that works very well indeed.

The best way to get a clear idea of how to use your hands and arms is to watch what the best runners in the world are doing with theirs. You will not find sloppy technique among the vast majority of the best runners. In any sport, the athletes we most admire are those who have the capacity to make everything they do look easy. The champions have an appearance of economy of movement which gives an illusion of ease. Those who are at the top are making maximum use of their bodies with powerful action. The way the human body is designed and put together demands that certain criteria be met for it to function the way it is supposed to. While it is important to take into account individual differences, the basic biomechanics required for maximum speed and efficiency will be the same for every runner. All humans have joints which bend the same way, and similar muscle elasticity and blood viscosity.

Posted by Tim Gorichanaz at 8:50 AM No comments: