This month marks my fourth anniversary of running. It was back in November 2010 that I ran my first 5K at the behest of my mother, who got most of our family to run around the Milwaukee County Zoo. Back in those days I couldn't run a 5K without taking a walking break, and it was only a few months before that that I ever ran more than a mile at once. We've come a long way, baby.

I put together the chart below to see my progress at various distances over the years. Phew! 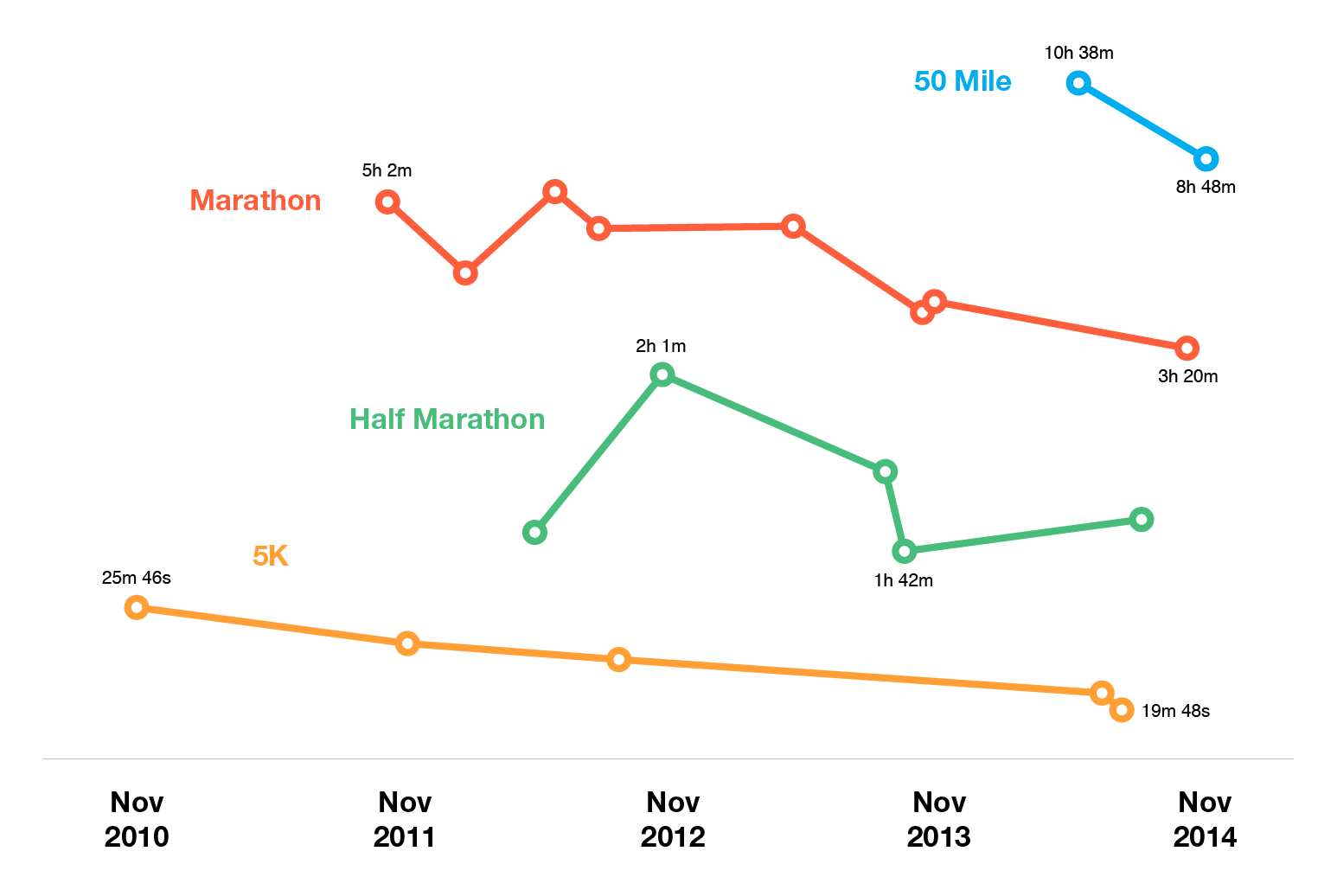 Posted by Tim Gorichanaz at 6:38 AM No comments:

Yesterday I faced the 50-mile distance again. "Face" isn't quite the right word; I was super excited for it. There wasn't a hint of nervousness... Most of all I was grateful for the opportunity (and luxury!) of spending the whole day outside doing something I love to do. (Of course, the "love" part of it comes in waves...)

The weather was perfect: The day started out a bit chilly (okay, quite chilly... my toes were numb while I was waiting to start), but immediately once we got started, I felt great. The temperature slowly climbed up to the mid-40s, and it was sunny or partly cloudy the whole way. Couldn't have hoped for better weather!

The course was challenging in so many ways. The first two miles were uphill country roads, and then we entered the Appalachian Trail and went uphill some more. The biggest climbs happened in the first five miles, but the next ten miles had some solid ups and downs. Since the rest of the course was flatter, I wasn't sure how I should pace myself: Do I go out really easy and pick up speed on the easier terrain? What happens if I poop out or cramp up—will I wish I went fast while I could? I decided to just follow my breath, doing my usual four-steps-in-four-steps-out, nose only. I told myself I'd allow mouth-breathing after mile 25, but in the end I didn't really need to at all. I think I paced it pretty perfectly.

The Appalachian Trail was crazy. It was entirely obscured by dead leaves, and here and there you could see the rocks jutting out from beneath. It took a lot of focus to choose my steps, but it was a lot of fun for the first 10 miles or so. After that it was a bit mentally taxing, but at least it wasn't boring. The first three hours just whizzed by. Toward the end of the trail segment the rocks got crazier, and the final half-mile or so was switchback trail going down the side of a cliff that was virtually entirely made of rocks. Trying to keep going fast while stepping prudently while not flying off the edge of the cliff was exhilarating. And I didn't fall once! I was proud of myself for that, especially because I saw plenty of other people take dives, and I also got an unfair share of heckling for wearing sandals. Yes, heckling: Usually people make amused comments, but people at JFK50 tended toward the rude side, which was surprising. But joke's on them, because it turns out sandals are the perfect footwear for treacherous trail running ;).

After the trail was the Canal Towpath. Somehow I was woefully misinformed in thinking this was a three-mile portion of the race, but it turned out that it was 26.3 miles. Lol. The towpath is about 10 feet wide and runs perfectly flat on a ridge between the Chesapeake & Ohio Canal and the Potomac River. At first it was a nice break from the crazy focus required on the Appalachian Trail, but it quickly became monotonous. It all looked exactly the same, so it was sort of like running on a weird twilight zone treadmill or something. Luckily I had some captive conversational partners to pass the time with. I met a guy from the D.C. area who was running his first 50 and we talked from about mile 20 to 27 and then we ran into each other again after mile 42, and we finished together. I met another Luna Sandals wearer, and a handful of other people whose conversations punctuated the crunch crunch crunch of the dead leaves that coated the path. I hit the marathon mark around 4:30, which was a good sign for a sub-9-hour finish.


Finally at mile 42 we pulled off the towpath and onto the country roads. This was nice because it broke up the monotony, but it was not nice because it meant hills. Normally I like hills, but after already having run 42 miles they bring mixed feelings. So I walked up the big ones. I probably would have walked a lot more, in fact, if I hadn't re-run into my D.C. friend, since I am super lazy and really good at talking myself into walking. But I'm so glad we kept each other in check, because it meant finishing faster.


All in all, this performance was almost perfect, I guess. My pace was sustainable (and I think I did that part well, since I kept seeing the same people throughout the entire 50 miles). I didn't have any stomach cramping (I made a conscious effort to eat slightly more than I felt I should, which still wasn't terribly much... I'm discovering Coke and M&M's work well for me). My muscles didn't cramp up at all either. And though there were plenty of struggles, the struggles were merely mental. Well, not "merely." Mental struggles are the worst. I felt tired after about mile 10, and just slogged on for the next 40 miles. I constantly wondered whether I started out too fast and if I would make it. I briefly entertained the idea of dropping out at an aid station because I was too tired to keep going (and also it would mean, presumably, unlimited access to cookies and Coke). But somehow I put those thoughts away long enough to dupe myself into finishing, and I'm so glad for that. I didn't have any let-me-die-already or I'm-never-running-again feelings on this one, so maybe that means I didn't push it hard enough. Whatever... What I wanted at this race was to beat my previous time and to finish feeling good, and I achieved that. Knowing that I can finish a 50-mile feeling good is tremendously important, and I think it's an important milestone into fine-tuning my performance in future outings.

The best part about JFK 50 Mile was the volunteers! The aid stations were plentiful (just frequent enough, in my opinion), and the volunteers were helpful and ebullient. There were always the old standbys you could count on (water, Coke, M&M's), and then enough variety here and there to mix it up (hot soup, potatoes, homemade cookies). It was always a treat hitting an aid station (literally).

Course lowlights: Having people right on my butt on the single-track was stressful! It kept me on edge, even though they didn't really want to pass. I also found myself in close proximity for most of the race to this manic middle-aged woman who shouted and screeched the whole time about random stuff, which was annoying...

Right now I can't conceive of running 100 miles, but I guess we'll see what happens when I give that a go in March. Right now I'm thinking I like marathons best of all and 50 Miles are alright by me, but I'm skeptical of 100s. But we'll see! After all, my first marathon experience was objectively horrible, but I've been coming back for more and more.

PS: I discovered after I got home that I got my first blood blister! Nothing serious... just a little "growth" on the middle toe of my left foot.
Posted by Tim Gorichanaz at 5:01 PM No comments: