I was starting to think I'd never finish another ultra. I got hurt sometime after last year's Via Marathon—too much, too soon after a hard (crash-and-burn) effort—and my 2016 season fizzled out with a DNF at Javelina Jundred and a slow-but-fun Philadelphia Marathon with Students Run in October and November, respectively.

But my heart lies with 100 mile races now, and not being able to finish Javelina was a real bummer. I had my sights set on Lake Martin 100, but still by mid-December I couldn't run without piercing pain going up my left lower leg. I wrote the race director, and he agreed to let me defer my entry to the 2018 race. (Bless him!) In the meantime, I was signed up for Dawn to Dusk to Dawn 12 Hour in May and I got myself in Vermont 100 in July. Surely I'd be healed by then...

I wound up stopping at D3 after 8 hours (50k); pain started after two hours of blissful running, and it slowly got worse. I walked a lot so as not to break myself, but I called it quits before too much longer. By the time Vermont 100 came along, I was pretty confidently running 40+ miles a week and my injury was mostly at bay, but I just didn't have enough training under my belt to finish such a hilly course.

So it'd been over a year since I finished a 100 mile, and the Western States lottery was nearing: To keep the lottery tickets I'd built up in previous years, I'd need to finish a qualifying 100-mile race before November. Time was ticking. I decided to do one in September, and settled on Hallucination 100 because it would be reasonably easy to get to and would hopefully be a doable course. It was a 16.66-mile loop course—my favorite format. It also started at 4pm on Friday, which meant I'd encounter nighttime much earlier in the race than normal—probably for the better.

Three of my siblings, a friend of theirs and I drove to Michigan on Friday morning. My sister Selena and I drove separately and got there first, so we set up camp. The others arrived and got situated before their 3–10pm aid station volunteer shift, and I went into my tent for a quick nap before the start.

Suddenly, it was time to start. It was sunny and our shadows were harsh, and then I was running into the woods with 150 other people. My plan was to take it slow, to try to stay steady through the whole race, and not finish any loop faster than 4 hours (putting me at a 24-hour finish). I walked up all the hills, and I just generally enjoyed myself. Life is good, I remember thinking. I was wearing sandals from the start, but soon I realized that I couldn't make out all the rocks and roots enough to avoid them (chalk it up to my poor eye acuity and everything down there being the same shade of drab). I switched to shoes, which offered more protection at the front but much less on the bottom—a catc-22 if there ever was one.

I saw my family at their aid station at mile 8—"So you have to go 92 more miles?" my brother said—and then again at mile 24. It's always such a fun "surprise" to see people you know after a long time in the woods. By then it was dark, and I settled in for another loop and a half of darkness. I put on some music. I was surprised how well everything was going. Maybe this would be an easy 100. At the same time, I wondered if everything would stay okay, or if I would have to DNF again. One hundred miles is a really long way to go, after all.


Things stayed quite good until mile 83, around 2pm. I saw my family again when I stopped by my drop bag tent (positioned conveniently right along the course), and I perhaps inadvisably bragged that I wasn't feeling tired at all. After that, I got really drowsy and a little crabby, but I kept going. I drank coffee and had some caffeinated gel packets, and I started feeling better. I slowed down a lot. The bottoms of my feet screamed, and I thought about changing back to sandals but then remembered how much more it hurt stubbing my toes. Things were getting worse.

Somehow I persevered. I don't know how. I never do. All you can do at the time is keep going. Focus on the next aid station, the next step. Focus on where you are, don't think in terms of miles. Things are never as bad as they tend to seem. I walked less in the sixth lap than I did in the fifth, and before I knew it I was done. I finished in 26-and-a-half hours, slower than the 24 or 25 I was hoping for, but still a comfortable finish. 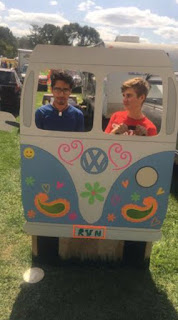 I had some lasagna, hung out with my siblings a bit more, and then I took a hot shower (!) and changed. It got dark. Selena brought me some Chipotle, and I took a few bites before falling asleep. I finished the rest in the morning.

Posted by Tim Gorichanaz at 12:05 PM No comments: