Pacer to Racer at Virgil Crest

Many weeks back, my mom asked me if I'd heard of "that guy Jake Brown." I hadn't. He was, she told me, this guy who was running barefoot across the United States, and that I should check out his Facebook page. I clicked Like but never saw any updates in my News Feed, thanks to Facebook's algorithmic assumptions, and then mostly forgot about the whole thing. Just a few weeks ago, though, my mom reminded me when she said that "that Jake Brown guy" was running a 100 and wanted pacers and that I should message him. So I did, and all of a sudden it was September 17—time to go!

I picked up my rental car and made the drive up to Rhinebeck, New York, a small town where, apparently, Paul Rudd and Uma Thurman, among others, go to hang out. It's also where that Jake Brown guy's mom lives, and that's where I was meeting him. He'd put his transcontinental run on pause to run the race this weekend, which required him to take a train from Columbus, Ohio, where he left off, up to New York. After the race, he'd gingerly make his way back to Columbus and finish up his trek—less than 600 miles to go. Which sounds like a lot, until you consider that he'd already gone 2,500. Lots of stories.

But it's not about him. He made that clear. It's about all of us. His project isn't about one guy running across the United States—any idiot can do that if they don't have anything better to do—but rather it's about fostering community. He's not running alone; strangers join him for stretches along the way, strangers drive his pack ahead for him, strangers give him money and food and a place to stay (having nothing, he's essentially a panhandler). As Jake was explaining this to me, over bacon-wrapped steak and a healthy side of sweet potato, I couldn't help but think of Zen monks (of course, with me, everything goes back to Zen monks). These monks relinquish their worldly belongings in order to meditate mu-gen—that is, infinitely—and they beg rice from the townspeople. The townspeople give the rice not because they find the monks so admirable, but because they see what's deeper: that the monks are rooting for all of us, that they connect all of us, that they show us there's another way to live in the world.

The next day, Friday, we made our way northwest toward the Finger Lakes. Along the way we passed what Jake promised was the best pizza place in the whole world—Benny's Pizzeria in Stone Ridge, New York—so of course we stopped and of course it delivered (I got a slice of classic sausage and then a slice of breaded eggplant, which was amazing—and I don't even really like eggplant). A few more hours and we made it to Hope Lake Park, in Cortland, where we checked in and Jake set up his camp—I'd sleep in the car. We finalized our plans, talked a bit with other runners, and then went to bed.


The race started at 6 a.m. It was my first time being at the starting line of an ultra and not running, so I got to appreciate the spectacle from the other side.


The plan was I'd meet Jake at mile 25 (the endpoint of the out-and-back) with some gear, then again at 50 (the start), and then at mile 75 (the endpoint of the out-and-back) I'd join him for the final 25 miles to the finish (the start). I was excited to get some night running practice in and to help coax a 100-miler-to-be out of the typical mile-75 misery.


I got to the mile 25 aid station around 10 a.m., which was super early, and I got to see the first runners come through. I didn't expect Jake till after noon, so I hung out and tried to read sometimes but mostly sat. There was a wonderful view from up here:


Shortly after noon, I got a text from Jake saying his ankle was messed up, that several people had looked at it, and that he was having trouble even walking. He wasn't far past the mile 20 aid station, but he wanted to make sure it was a legitimate injury before throwing in the towel, so he was making his way toward mile 25, and he'd keep me posted. Yikes. Long story short, I picked him up around mile 24 at a road crossing about two hours later, and we drove back to the start (the finish), where he officially dropped out of the race.

Bummer notwithstanding, I kinda still wanted to get in a long run over the weekend. I was thinking about going for a 20-mile run the next morning on the streets, but how stupid would that be when I was already at a race with a beautiful course... If only there were a way... And then I realized that the race weekend had a 50k the next day. (The 50 mile and 100 mile both started together on Saturday, and the 50k started on Sunday morning.) I spoke to the race director, and he awesomely let me register for the 50k. Which meant I'd be able to mark New York off my states-to-race list.

Now that I was racing, I went to the grocery store for an avocado and some dark chocolate, and that night I found a more comfortable way to sleep in the car (the trunk). I woke up the next morning SO EXCITED. And the race didn't start till 8, which is super late by ultra standards, so I had plenty of time to drink coffee and get ready.

The race itself was super fun. It was a small field, about 25 runners, and we quickly spread out. For long stretches (and virtually all of the second half) I didn't see anyone else. It was super tough. I hadn't been training on trails at all recently, and I almost forgot how mentally taxing it is having to pick out your steps. And then the elevation: The 50k course had about 6,500 feet of elevation gain and the same amount of loss. A lot of this was cruelly near the turnaround, where we had to climb up two ski slopes, including one black diamond–rated one. Still, I was really happy with my performance. I pushed myself to keep flying down the hills when I could, to make up for the long, slow climbs. All said, I finished around 6:24, which seems slow (slower than 12-minute miles) but it put me in 8th place overall. 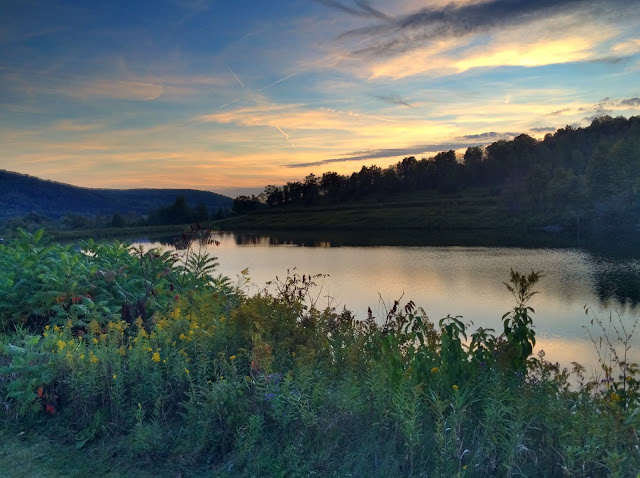 It was such a great weekend. Mostly, being out of the city and in a wonderful, remote place. Then, the ultra atmosphere, which is always... nice. Then, all the awesome people I got to meet. It always strikes me as amazing how ultrarunning can bring people together.