My legs are tired

I woke up to my alarm at 6:00 a.m. and decided that there was no way I was getting up for another 10 minutes. So I hit snooze. I must have actually hit dismiss, though, because my alarm never went off again. Instead, I woke up at 7. A little later than I wanted to get out there, but I wasn't about to not run because of a little late start. I mean, 18 miles... it was going to be a big day.

Maybe two miles into my run, I felt pretty tired and was actually starting to question whether I'd make it the whole 18 miles. Maybe I'll just stop after a half marathon, I told myself. But I quickly shooed that me away and continued plodding forward.

On a side note, I am eating eggs and vegetables right now, and there are mushrooms in here that taste kind of like fish.

There were a few parts of my run where I felt a little wave of nausea come over me. It was weird... they just lasted for 5 seconds. Wonder if it was because of the gels I was taking? Here's what I consumed today: Pre-run cup of Gatorade, a nibble of a Clif Bar and supplements (glucosamine, calcium, multivitamin and fish oil), then caffeinated energy gel with a few laps of water at Miles 8, 10.5 and 16. Today I didn't drink any water except for when I was taking gels.

I also realized that I haven't been getting side cramps much anymore. I used to get them about 2 miles into my run, every time I ran. I only noticed that hadn't been happening anymore when I got the suggestion of a cramp around Mile 10 today, but it only lasted for a few seconds. Not complaining... I welcome their absence. They were/are mildly irritating.

Oh, it rained, too. For probably the last hour of my run. Started out quite nice... like a mist, and it was cool since it was pretty fresco outside—very refreshing. The rain picked up in my last two miles, not bad though.

I finished my run in 2:50:20, meaning it took just a bit longer than it took me to run 17 miles last week. I was hoping that'd happen. I still can't get over the fact that I'm somehow able to run for 3 hours. It's kind of mind-boggling, considering that one year ago I couldn't even conceive of running for a half-hour.

One other neat thing to report... I tied my keys to my shoelaces today, and after my run, when I lifted my foot to the step outside my apartment building to untie my laces and retrieve my keys, my feet were twitching uncontrollably... much like the severed leg of an insect, actually, but faster. It was pretty much the neatest thing ever.

And now my upper legs are ridiculously tired. So are the bottoms of my feet. I've been walking/sitting/standing/lying for the past hour or so and they've gotten a little better. Breakfast undoubtedly helped.

Other life news: I just received some Fleur de Sel from le Saunier de Camargue in the mail, and it's fantastic salt. I'm growing a kombucha mother in my pantry (will be ready in 11 days or so). My little brother graduated high school, finally. And we're celebrating Belgian Beerday in my apartment today.

Posted by Tim Gorichanaz at 9:05 AM No comments:

I got all the way downstairs (I live on the second floor) and realized I forgot my watch. I didn't feel like going all the way back up to get it, so I ran without it. Pretty standard lakeside run. Very nice. I think it was about 40 minutes.

The run was pretty tough... Maybe it's because I took the Oak Leaf Trail, which is somehow much less interesting when you're running it than when you're biking it. Even with a really interesting podcast.

Oh, and I got a bloody nose a few miles in, requiring that I use my shirt to mop up all the blood that'd otherwise mix with my sweat and make me look much more massacred than I really was. I didn't need that kind of attention, I decided. I guess I was due for one of my signature random bloody noses; I hadn't gotten one in a long time and they usually come every two or three months.

Bike ride instead of run

Today I was slated to run 5 miles. At the last minute, though, I decided to go for an extensive bike ride instead, simply because I hadn't gone for a bike ride in a really long time, and it'd serve just as well in helping to build my cardio base. That and it's less intense on my bones... which probably could use a little bit of recovery.

Not sure how long I rode for (didn't bring my watch) or how far I went (I think around 15 miles). I did wear my helmet, though. And I discovered that my headphones and old 3G iPod Shuffle were, in fact, working again. This is good because my new iPod is just about as useless as ___________.

Anyhow, I'm getting really pumped for my marathon. I started reading Hal Higdon's Marathon again... reading it with a few months of training under my belt is a totally different experience than reading it right at the outset. I'll probably read it again right before my marathon in October and get something totally new out of it.


Posted by Tim Gorichanaz at 5:16 PM No comments:

As my Saturday runs have been getting longer, I have been less and less inclined to bike ride for my Sunday cross-training. Usually I've only been able to make it out for a walk. Today was another one of those days. Guillermo and I walked around (me being barefoot) for quite some time.
Posted by Tim Gorichanaz at 4:55 PM No comments:

Things went pretty well today. Woke up promptly at 6:10 after only a single snooze, pounded a Red Bull and suited up for my run. Was pretty standard fare: perfect weather, nice and overcast for the most part with a few peeks of sunshine, a steady, refreshing breeze. I was listening to a great linguistics lecture on Arabic diglossia and the media mixed in with a few songs. I discovered "Down on Me" is the perfect song for running (turnover of 90 just by running to the beat).

But then around Mile 10 my iPod died. Not the battery—the iPod. Stupid thing. So I decided to put the next 7 miles to work thinking about my new novel... I made some good plot advances that you may read about someday. I'll just tell you it has something to do with Poland, Spain, painting and Muslims.

The last mile was pretty tough... my thighs were getting really tired and my mind was having trouble focusing on anything except for how much I wanted to stop running, and then the Lafayette Hill almost killed me. I feel great now, though, except for my burning thighs. I guess that's to be expected though.

Went down to Chicago (again) today for our office party. Lot of fun but I got home late again and had to run still. No biggy though; only 4 miles today. Bright side: We got our Internet fixed yesterday.


Today I think I hit a new PR. I ran a great 4 miles up the Oak Leaf Trail (well, 2 there and 2 back). Ran the whole way with no walking. Felt great to be in my Vibrams again. Oh yeah, I forgot to mention… all the pain in my ankle and knee is gone. I'm back to normal! Yay!

But just for a preventative measure, last night I bought some glucosamine, multivitamins and calcium. Figured it's worth it to help protect my bones from all that stress. And Walgreens had all their supplements half off again.

Posted by Tim Gorichanaz at 4:47 PM No comments:

Sorry for the delay in these updates... Although if you're not a frequent visitor, then you probably don't even notice since I've been backdating them. It'll be back to normal (probably, maybe) once we have dependable Internet, hopefully tomorrow night.

Anyhow, I woke up early (well, later than I wanted to) and ran a good 13.1 miles. I took the advice of a fellow marathoner and listened to a podcast while I ran instead of music... It certainly helped a lot. I've been finding myself increasingly bored with my music lately, so it was nice to be mentally engaged in something while running. In case you're wondering what I was listening to, it's an 8-part lecture series I found on iTunes U on Aesthetics and Philosophy of Art. Pretty interesting so far.

And not to mention my new route is fantastic... I ran up Lake Drive until Silver Spring and back. No traffic, and lots of nice scenery.

I didn't even notice the miles go by.

So my little donation promotion has ended (a few days late... I didn't think about how I had to move on August 1 when I promised to announce the winners on that day), and I want to give a big thank-you to everyone who participated. I'm packing up the 4x6" prints for everyone tonight, and I selected the lucky winners of an original 9x12" watercolor and, perhaps more importantly, the small, plastic mule.
Winners!!!
Watercolor: Terri Brunner
Mule: Abby Kirchman
Congratulations, and thanks so much for donating!
If you missed out, don't worry. I'll still send out 4x6" prints for every donation of at least $25. So go ahead and donate. If you already donated, do it again! 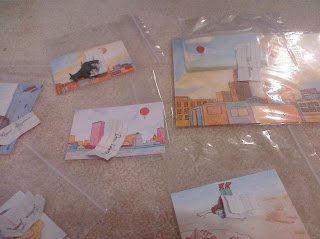 In other news, my knee is much better. I bought a brace today and it's already helping a ton. Just going to rest and ice another day or two to be sure...
Posted by Tim Gorichanaz at 8:29 PM No comments:

This week is a step-back week in my training... But I'm going to take a little break from running because my knee has been tender and sore for the past few days (a tiny bit after Tough Mudder and noticeably worse after Sunday's "run"). So things don't get worse, I'm resting and icing for the next few days. My long run on Saturday will be my next run.

Yesterday was a rest day anyway (I didn't get any rest on Monday because I was moving...), so today is really the first day that I'm actually skipping my run, and it feels weird. Not in a good way. I just want my knee to get better so I can run again. Going to buy a brace from Walgreens.
Posted by Tim Gorichanaz at 2:28 PM No comments: