A day later, I still can't believe it.

I still remember clearly the long, seemingly endless struggle to finish a marathon in under four hours. The disappointment that always shaded the should-be joyous accomplishment of finishing a marathon. Of finishing my first marathon—then my second, third, fourth. And, of course, I still remember the first 17 years of my life, when I couldn't manage to run a mile, and the few years after that when all I could run was a mile.

The four-hour wall crumbled for me last October when I ran a 3:45 marathon. That was a 28-minute marathon PR for me. I did another marathon a few weeks later, which left me injured for several weeks (oops). After that, I did a winter trail marathon, a winter 50K (my first ultra) and then my first 50 mile, so it's been a while since I took the opportunity to have a go at a road marathon.

Going into the race, I vaguely figured I was in even better shape than I was last October, so I should have no trouble beating my 3:45 time. And yet, there was something in my mind suggesting that 3:45 could have been a fluke... After all, I'd only done it once, and my eight-marathon average finishing time was 4:30. Looking back at my training also made me a bit skeptical of myself: My pace during my long runs averaged 9:30/mile or so, on a good day (though I made a point of running them at a casual, relaxed pace), and my easy runs often dipped slower than 10:00/mile. In order to beat my marathon PR, I'd have to exceed about 8:30/mile on average. It seemed like a tall order.

There were a couple redeeming aspects of my training, though, that gave me hope that I could quash my 3:45 PR: I did speedwork twice a week—usually an interval session and a tempo session every week. And I was doing very high (for me) mileage, averaging 70 miles a week for the past few months. My tapering for this marathon took me down to 50 miles a week, which about a year ago was my mileage on peak week. Finally, this summer I ran two road 5Ks that resulted in two big PRs: First, I ran 20:30, then I ran 19:48—achieving my longstanding goal of beating 20 minutes. Later in the summer I ran a neighborhood half marathon where I made a point to run casually and not exert myself in the first 8 or 9 miles, and I finished in 1:45—nearly beating the PR that I had worked so hard to earn last year, almost hurling in the final mile.

So I made my way up to Scranton for the Steamtown Marathon, slept in a smoky motel room and sat on the bus to the starting line. Talking to a few people pre-race (people love approaching me to talk about the sandals...), the majority of the advice was to run conservatively the first half, which was mostly downhill, to save up for the second half, which had some climbs. I think this advice (which was mirrored in countless emails from the race director) caused a lot of people to go way too slow on the downhills. Thinking back, I remember passing a lot of people on the long downhill stretches (some were a few miles long), and then in the final three miles of the race I also passed a lot of people—and only one person passed me, and that was in the final half-mile.

Still, I heeded the wisdom of not going out too fast, and I made sure that for the first half of the run I would only breath through my nose, and make every inhalation last at least four steps—same with every exhalation. This is my way of keeping my heart rate (and, by proxy, pace) in check without having to use a watch or anything. Another innovation I practiced during this race was to not look at my watch for the first half, and then only after mile 20.

The course was stunning. As a point-to-point race in hilly northeastern Pennsylvania, it was pretty rural. And at this time of year, the foliage was gorgeous. The course took us through a few towns with lots of interesting architecture in their centers, and there were plenty of cheering spectators along the way. (Which meant shouts of, "Flip flops!?")

Loading
The course was so beautiful! Such autumn! Forgive the awful photo; I didn't want to stop. But you get the idea.
View on Instagram

I was nervous coming into the half. I knew I was trying not to push it, and I felt relaxed. If I was going to beat my 3:45 marathon, I needed to hit the halfway mark around 1:52. What would I do if I got to the half and I was way behind? My problem turned out to be the opposite: I got to the half at 1:39, which was better than my previous half marathon PR. Now I was a bit nervous: What if I couldn't keep it up?

The next several miles whizzed by. Literally, I guess, because I was going faster than I thought I had any business going. I decided to keep up my conservative breathing routine till mile 15, when I would allow myself to take only three steps per inhalation. Around mile 18, I allowed myself the occasional mouth-breath. I knew I was almost done, but the final six miles of a marathon can be brutal if you didn't save up gas.

When I hit 20 miles, I was astounded. My time then was 2:33, meaning I could take 12 minutes per mile for the rest of the race and still beat my 3:45 PR. (If I did my math right in my semi-crazed state.) That was very comforting. And now that that was in the bag, I decided to be a bit more ambitious: I only had 6 miles left, and I was feeling good. Since I knew I'd beat my PR, I was the king of the world. The question was how much further behind me the next guy in line would be. So I decided to ramp it up and see what happened. The idea popped into my head that I might be able to finish in 3:20, which would put me at 25 minutes better than my previous PR. Considering it was my 25th birthday, I couldn't resist. 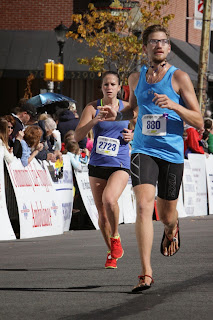 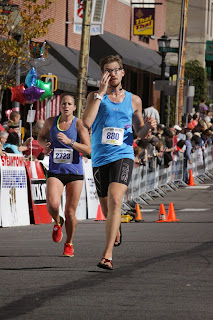 I started inhaling through my nose and exhaling through my mouth, consciously increasing my turnover. I felt a few twinges in my calf muscles, which really scared me—should I back off? When the twinges came I did back off for a few minutes, but then I forgot about it and my speed crept back up. In the end, I had no cramping or pains or anything to speak of. In the final miles, I made a game of reeling in the runners ahead of me. I passed so many people! I kind of felt bad (but kind of not) for all the people who were struggling up the hills, because I was just cruising. I was on Cloud 99999999 and nothing could have been better. 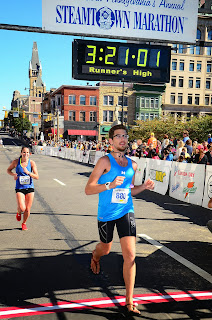 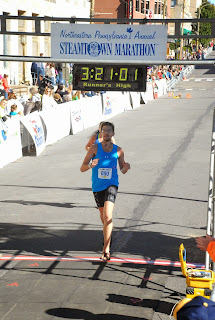 I finished in 3:20:35, making my 25-minute PR. I gathered up some food from the post-race feast (it was seriously plentiful) and went to lie down in the grass. What a great birthday present.

Loading
Time to sit in the grass for a while after a great marathon.
View on Instagram

Posted by Tim Gorichanaz at 9:05 AM

Email ThisBlogThis!Share to TwitterShare to FacebookShare to Pinterest
Labels: Marathons