This weekend was my second attempt at Vermont 100, and I'm happy to say I finished.

Vermont is not a technical race by any stretch (I'm not sure if it even properly counts as a trail race, as most of it is on dirt roads), but it's a punishing course. 17,000 feet of ascent (and descent) is nothing to snivel at, and Vermont is humid. And this year, we had the added benefit of the race occurring on the hottest day of the year. The temperatures were in the upper 90s, with a heat index over 100. And there wasn't much reprieve at night, though the temperature ostensibly dropped 20 degrees.

At the pre-race meeting, race director Amy Rusiecki shared some advice: Don’t be a hero. Be a finisher. It's something I've heard before—we all have—but I found it especially inspirational on this day, in the heat. My dreams of finishing under 24 hours went out the window by midday, and it would have been easy to get discouraged. Or, on the flipside, to try to catch up and burn myself out. Both would have led to another DNF, and I didn't want that. 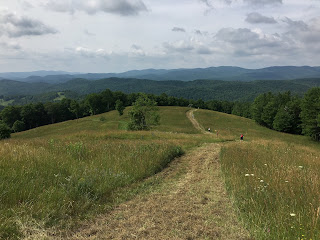 That said, besides slowing down, I didn't face too many difficulties in this race. It definitely went better than my last attempt at VT. I didn't think about dropping out at all, which is unusual for me. The biggest problem was being wet for 27+ hours, which caused chafing in every unspeakable place, even in my usually-silver-bullet Saxx shorts. Besides this, it stopped me from taking many photos, since my phone and hands were always wet.

For my training this time around, I did the 12-hour at Dawn 2 Dusk 2 Dawn again back in May, where I covered 58 miles on the track. After recovering from that, I did 20 miles and 10 miles almost every Saturday and Sunday. I made sure to work in some hill training (difficult here in Philadelphia), which I did in West Fairmount Park (repeats up and down a 1/2-mile hill) and on the treadmill (hiking for 30 minutes at a time with the incline at the max of 15 degrees). And of course strength training (power lifts) 2–3 times a week, as usual. 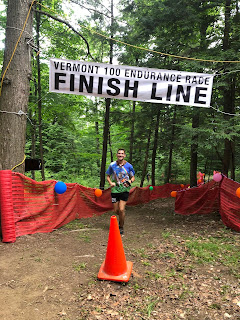 Big thanks to my mom, my sister, and her boyfriend Erik for coming to see me a couple times along the route. That was unexpected! It's always heartening to see friendly faces... even if I don't always act like I appreciate it in the moment.