Vermont 100 has been on my mind since I first started running ultras. It's one of the nation's oldest hundreds, and in my (long and slow) quest to do a race in every state it was the first one to come to mind for Vermont. I signed up in 2016 but couldn't run because a friend's wedding fell on the same day, so I aimed for 2017 instead. 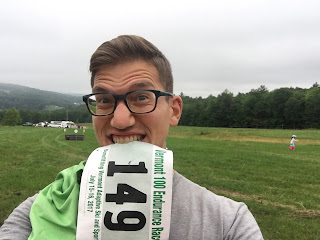 For all the mythos of Vermont 100 I'd built up in my imagination, I knew nothing about the course, as it turned out. I expected it to be a bit hilly, I guess, and green. I knew it was more or less entirely on dirt roads. Understatements.

I approached Vermont 100 on a long DNF streak. The last ultras I finished were Zion 100 in April 2016, the 12-hour at Dawn 2 Dusk 2 Dawn in May, and then a small, New Jersey 50k in June. The next month, I DNFed at Big Butts 100k (in Mississippi, due to the heat). Then in September I got a major injury that I think was a stress fracture in my left fibula, and I couldn't run for most of September and October. At the end of October I attempted Javelina Jundred, notwithstanding that I hadn't run since my marathon six weeks prior. I DNFed at mile 40 from what I described as heat exhaustion. It was in the 90s and pure sun, sure, but perhaps part of my problem was not having run sufficiently in training. I took off for a while then (except for running the Philadelphia marathon-and-a-half weekend in November), and didn't run at all in December. Starting in January I eased back into the elliptical, and then in March I started running. My next ultra was the 12-hour at Dawn 2 Dusk 2 Dawn in mid-May, where I had to call it quits after 8 hours (and I stopped running after 2 or so) because my injury was flaring up again.

Finally, starting in June, my running became consistent enough for me to go longer, and by the end of the month I was up to 50-mile weeks and I'd done two 20-mile runs. I had been focusing on building volume, and I only dedicated a very little bit of attention to hill training. I felt a bit undertrained for a 100-mile, but I thought it might be enough for a finish. To my credit, though, I'd been doing weightlifting three times a week and making consistent gains there: my one-rep max for squat is about 208 pounds; for deadlift 370; and for bench press 163.

In the last pre-race email, the race director warned of mud. It's been a wet spring in Vermont, she said. Since I run in sandals, mud is a big worry for me. If there's just a little, it's fine, but if there are long stretches of wet and unavoidable mud, all bets are off. I brought my pair of shoes just in case, but it wasn't until after I'd left all my drop bags at the pre-race meeting that I decided to actually run in them. Consequently, I didn't pack extra socks.

Anyway, I set out wearing shoes and compression socks—when I was packing, I didn't seriously expect to be running in shoes, so I didn't bring any normal socks.

Immediately, it was a lot of fun. The race begins with a long, encouraging downhill. And the fun continued for a while. I was making great time, marching with gusto up the hills and cruising like the Batmobile down.

I first started to get worried around mile 15 when my muscles were tighter and tireder than they ought to have been. But part of ultrarunning is keeping going even when your muscles are tight and tired. For a long time, things didn't get much worse. 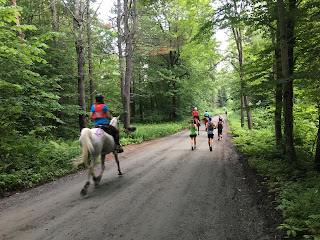 Soon the horses were around. One thing I learned just prior to the race was that Vermont 100 is also a horse race, and it was a fun experience running alongside horses. The aid stations were great, with some of them having homemade baked goods along with the usual fare, and the volunteers were helpful, always offering to fill my bottles, etc. The countryside was gorgeous—everything deep green, tall trees, sprawling mountainside farmland.

I heard a lot of interesting conversations. Everything from, "That's not a frog, you idiot, that's a flower," to "I think Billy died last night. I got a call from Margaret and it didn't sound good, she just said there was an emergency. I don't think she wanted to say it in a text, and she couldn't get a call to go through." 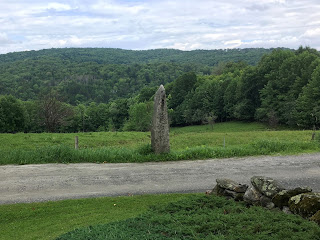 The course quickly caught up to me. It was endless hills. Virtually no flat stretches along the entire course. Several climbs that took 15 minutes or more to hike up. And I kept hearing, "It's like this to the very end." As usual I wondered often if I could make it. But I could keep going, so I did. 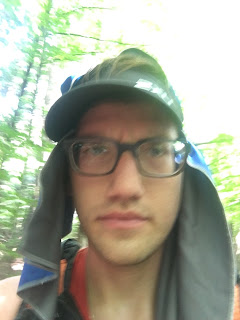 My muscles got tighter and tireder, and by mile 50 I was in poor shape. I had to walk more, and slower. I sure wish I'd packed some Wintercrest in my mile 47 drop bag. I hoped that if I just kept going, things would loosen up.

Long story short, the next 10 miles were the same, and after mile 60 things got really bad. I could only shuffle along, my quads stabbing with each step, and the hills had me out of breath. I had to stop and take breaks. By mile 62 I was exasperated and my legs were rock solid. I had been thinking about dropping out at that aid station for the past 4 miles, but for some reason I just kept going. Shortly after tha aid station I realized that was a bad idea. I didn't think I could even make it to the next aid station. By this point even going downhill was slow and painful. 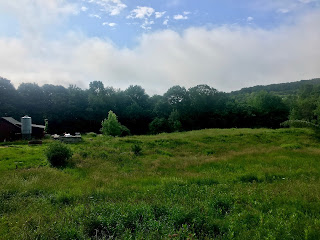 The ultrarunning ethos says to keep going until you simply can't take another step. So long as you can take at least one more step, then you should take it. Part of me wondered if I should slog onward through the night, for the next 14 hours, at this pace and in this pain. But some quick math showed me that around midnight I'd no longer be making the cutoffs at the pace I was going (which was, moreover, slowing).

But first I had to make it to somewhere I could drop out. By this time I was a mile and a half from the next aid station and the same distance from the prior. So I sat on a rock to gather the gumption to carry on. That's when a patrol van pulled up and asked if I was okay, and the rest is history.

Dropping out doesn't feel good. The student in me frets over the grand "waste" of money—if I paid for the registration, car rental, hotel and supplies and spent all this time coming up here, shouldn't I finish? Who have I let down? My friends and family, all the people on Facebook... myself? There's always the question: Mightn't it have gotten better? Couldn't I have finished? I'm not sure. It doesn't seem all that productive to think about that right now, because all it does is show that I already forgot how bad things really were out there at that time.

I'm also worried that I have preserved my long DNF streak. That is not encouraging. Will I ever finish another 100 miler?

For now, I'm going to resume training and do another one this fall. I'd like to keep myself in the Western States lottery (though that will be a whole nother horror if I get selected), so I signed up for Hallucination 100 in September. By then I will have time to bring up my mileage sufficiently. One good outcome from VT100 is that I think I can pronounce myself no longer injured, if I could make it 60 miles with no sign of a flare-up.

I did have a few successes at VT100, which are worth mentioning: It was hot and humid, but that didn't bother me. I think Philly acclimated me well, and I had a solid strategy of using ice (eating it, filling bandanas with it) to stay cool. I also didn't have any chafing, even though my Orange Mud quiver usually chafes my underarms (don't ask me why I was wearing it...). I never ran out of water (partly because the aid stations were quite plentiful!). I didn't have any stomach issues (more-than-usual bathroom breaks notwithstanding). And the shoes didn't bother me at all.
Posted by Tim Gorichanaz at 4:13 AM